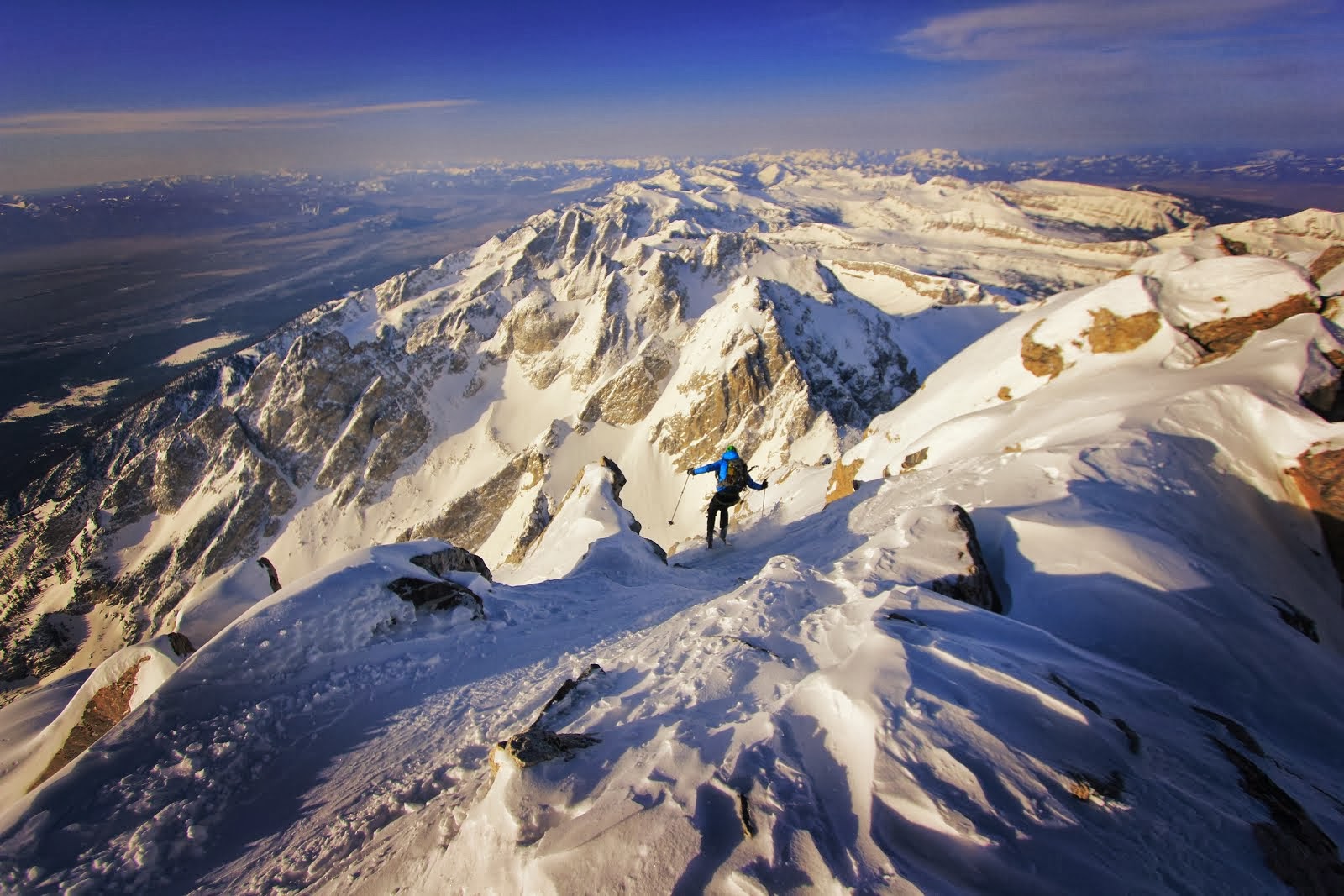 The Utah 13ers are all located in the remote Uinta Mountains. Before this adventure I had never set foot in the High Uintas Wilderness. Jason Dorais and Lars Kjerengtroen a few weeks prior took down the FKT on the roof of Utah, Kings Peak. They brought back some stoke on the Uintas. According to summitpost.org some of the peaks are 40 mi round trip just for one. This seems like a touch of hyperbole now that I know the area, but the approaches are long. So why not make the miles count and tick them all off in a single outing? From my naive position, this seemed completely reasonable. So we set plans into motion to test the theory.

The first issue encountered in recon is the number of peaks. There are numbers ranging from 17 to 21 13,000' peaks depending on the level of prominence considered. David Rose's book Utah Thirteeners is by far the best resource for beta. However, the book does not seem to be rigorous in its usage of names -- as many do not have official names the author gave his own nicknames further adding to the confusion. Fortunately the route is straightforward enough. All of the discrepancies can be ironed out by hitting every bump on the prominent ridges with only 2 small exceptions.

The only question marks on the route: are "Cliff Point" and "South Mount Emmons" prominent enough to extend the route for them? "Cliff Point" was only about 100 ft above the saddle between it and "Henry's Fk Pk", but it was so close we decided to hit it anyways. "South Mount Emmons" only has 270 ft of prominence from the saddle between it and Mount Emmons, but it seems logical enough to hit as well. All others either have well over 300 ft of prominence or sit on a ridge we would have travel over anyways.

The route would start at the trailhead gate at the end of the road in West Fork Blacks Fork in the north, tackle each group as ordered above and then exit Swift Creek to the south. Roughly 60 miles and 23,000' of ascent. 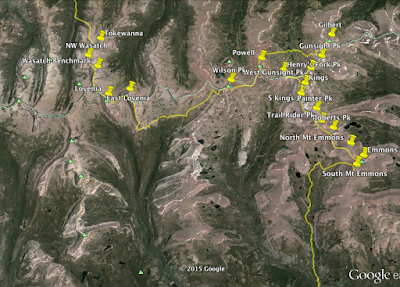 Jason and Lars were chomping at the bit to get this one done before the fall arrived. Unfortunately for Lars, it became clear that an injury to his foot prevented him from being able to do much scrambling and was out for the near future. Jason and I picked a date on the calendar (9/9 and 9/10) and hoped for good weather. Lars probably hoped for the opposite (sorry buddy!).

As the dates got closer, the weather looked perfectly stable and dry. Despite a minor illness on Jason's part and some recent travel for work on mine, things seemed to align well.

Jason picked me up at 6:30am. We stuffed our faces with food and drink on the drive to W Fk Blacks Fk and began the adventure promptly upon arrival (9:30am). Jason took great pleasure signing into the trailhead register and putting Swift Creek as the destination.

We strolled casually through the first miles of trail and a herd of sheep. Fortunately the sheep dogs were only barking far in the distance. Then after a mile or so we turned up to gain the ridge below Tokewanna. We tagged the summit in under 2.5 hrs and proceeded south along the ridge.

The first day went splendidly, moving at an easy pace with a full stomach. Before we were on the route, there was some concern about the way off of East Lovenia. In full daylight navigation was simple, including the Lovenias. We were off of the first group and having a water filtering and dinner stop shortly after 5pm in the Oweep Valley.

We made the 5 mi trek up valley on and adjacent to Highline trail as it was not always easy to follow. We gained Porcupine Pass and left the trail to tag Wilson Peak. We lost the sun and twilight just as we reached the summit. While on the summit, I cracked the LCD on my phone rendering it useless and had to stop my watch because it was getting low. We would need the watch for navigation later in the night.

The descent off Wilson was the first time it felt like we slowed down significantly. We took some time staring into the darkness deciding how to navigate the loose steep descent toward Smiths Fork Pass. In the end it was pretty easy, but the darkness made every decision take longer.

We took a brief stop for food near Smiths Fork Pass. We noted the stars looked like nothing we had seen before, so bright and so many stars. Then we began climbing the long ridge up to Mount Powell.

The footing on the lower ridge was the nicest so far with some grass between the rocks. This was short lived however and it was back to talus hopping along an undulating ridge.

Once on the summit of Mount Powell we tried to spy our descent into Henry's Fork. In the dark the bowl was much larger and more wide open than anticipated. It seems to take forever to navigated the large talus. In the end it was a lot of what we could expect the rest of the trip, but at the time it felt heinous.


Once into Henry's Fork we stopped for a water fill up and food again. It was now after 1am and we began the 3 mile trek across the basin. This started out easy and slowly began to get more unpleasant in terms of the terrain. Small creek crossings became larger and more numerous. Small willows turned into giants. Eventually we were wasting a lot of time and energy trying to find the paths of least resistance. Cold air was setting in and standing water was freezing. Just before the Henry's Fork Trail we topped off water -- we also knew this would likely be our last fill up until reaching Swift Creek drainage. This would end up being more than 14 hours later!

We reached the Henry's Fork trail and took it south to just below the gully we chose to ascend for Gilbert Peak. It was now 3am! We decided to take a quick 15min nap before ascending Gilbert. I woke up shivering before Jason's alarm went off. The first 1000ft up the gully was the first time I felt real fatigue in my legs. Once out of the gully the angle yields to an easy grade. Gilbert is riddled with false summits and made worse by the darkness.

We summited Gilbert and made our way toward Gunsight. Twilight was beginning to show on the horizon. After topping out Gunsight we could put away the headlamps. The sun rose on our descent to Gunsight Pass.

In the early morning, partially due to the cold and partially to rationing water I had ate and drank much less. The climb up West Gunsight was awful for me. I decided to gamble on feeling good more immediately than later in the day and ate and drank a large portion of my remaining liquid and calories.

From Anderson Pass, I started to feel better on the out and back to Henry's Fork Peak and Cliff Point. Kings Peak hurt a bit, but I also knew this would be the largest climb remaining (though similar to Emmons).

South Kings was probably the easiest summit so far (not counting Cliff Point). At this point we began to feel that we would get the remaining done without a complete sufferfest. The rest of the summits after South Kings went in a predictable fashion: move quickly and fluidly as possible over the descending and flat talus riddled terrain, suffer for a few hundred vertical to get to the next summit, sit down and pause on the summit before starting it all over again.

Pretty soon we were on the top of North Mount Emmons looking at the two remaining (Emmons and South Mount Emmons) in very good moods. At this point though we were both out of water in the blazing sun, the hottest of the trip.

We made good time up Emmons, despite our state and its many false summits -- something we had come to expect from the Uintas at this point. On our way over to South Mount Emmons to finish the peaks, there was a cool scene with this mountain goat standing on a diving board of a rock watching us from above.

The descent into Swift Creek ended up being pretty horrible. Jason had read of some possible trail, but we found none. Instead we dropped steeply into the valley on horribly loose talus of varying sizes.

Jason beat me on the race to the nearest stream! As I got to him I asked if had seen the tents to our right as we descended as I thought they might be near the trail. He said no, but went to go check it out as I filled up my water. He came back a bit later yelling something about rocks. Apparently they weren't tents at all, but rocks! We had a pretty good laugh over the fact that he started talking to the "tents". This began our weak hallucinations for the rest of the trip, seeing patterns or objects in our surroundings which were not real.

The Swift Creek valley is much wider to the north, so instead of trying to cross the valley immediately we decided to take advantage of the easy travel and head south before trying to find the trail.

At some point we decided to head west to try and find the trail but we found none. I thought it could have been to the west of the creek so we switched over, but could not find it. The light was fading at this point so we dared not venture far from the creek which would also take us to the trailhead.

The bushwacking got much worse, the stream became more gorged out and difficult to walk next to, it was getting dark and we probably had another 5 miles to go. Things were looking grim. At some point we came across a beaver pond with a dam. We stopped to debate which way to go, and ultimately decided to walk across the dam. Once on the other side we walked a few hundred feet and there it was, the trail!

The rest was easy... or at least I'd like to think so. The truth is, I felt pretty crappy the last mile or two and was cursing the amazing trail we were on for its switchbacks and other nonsense. But finally we arrived at the trailhead, found Amanda waiting for us, gave some high fives and agreed "Let's never do that again."